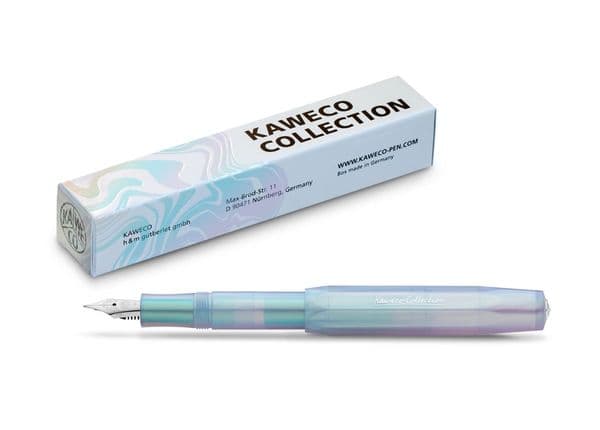 The 5th pen in the Kaweco Collection will be Iridescent Pearl. It is a fountain pen made of high-quality plastic with chrome elements. It is available in Kaweco's standard 5 nib sizes.

Kaweco COLLECTION is a range of approximately 6 special colours per year, which will be released in addition to the standard ranges. Each release is available to order for 12 months. It features colours that match current trends. With Kaweco COLLECTION, Kaweco can explore new colour combinations without the need to conform to the look of a particular series. The pens come in special packaging, have "Kaweco Collection" branding on them, and are mostly fountain pens.

If a colour proves to be super-popular, Kaweco may decide to make it a mainstream colour the following year.

With the Kaweco Collection Iridescent Pearl, Kaweco has created a fountain pen with an unprecedented variety of colours. Depending on the viewer's angle of vision and the incidence of light, the pen shines in an uniquely iridescent colour scheme. Inspired by the optical effect of mother-of-pearl, the translucent material shimmers in colours ranging from green-bluish to pink. It is available in five nib sizes from EF to BB. The Kaweco Collection Iridescent Pearl comes presented in unique iridescent hot foil cardboard box Kaweco have really up their game - iridescent sport is a true stunner and it comes with a cartridge now which is a plus! Affordable and writes perfectly

The nib is super smooth on the BB