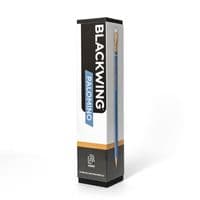 ​​​​​​​Blackwing pencils were favored by award-winning creators throughout the 20th century. Despite a cult following, they were discontinued in the 1990s. Devotees began paying as much as $40 on eBay for a single pencil.

In the early 2000s, Blackwing used their access to the best wood, graphite and artisan makers in the world to introduce a premium pencil line they called Palomino. The buzz surrounding Palomino led Blackwing fans to ask us to try and bring Blackwing pencils back for a new generation. In 2010, they did just that.